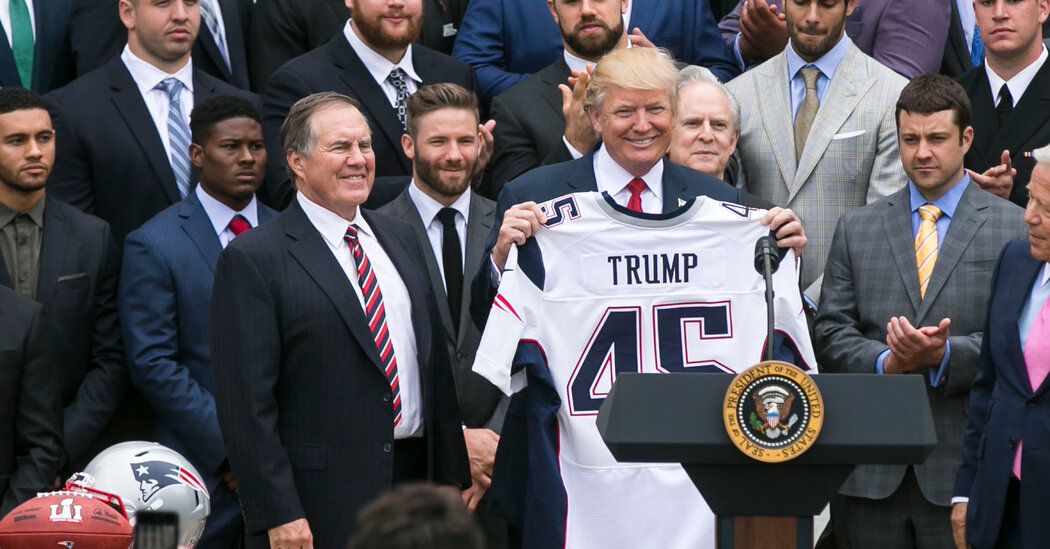 On the eve of Election Day in 2016, President Trump read a letter of congratulations from the New England Patriots’ longtime coach, Bill Belichick, who called him the “ultimate competitor and fighter” and said that he had run a “tremendous campaign.”

With just days left in his term, he plans to give Belichick the Presidential Medal of Freedom, setting off questions about whether Belichick will accept the nation’s highest civilian honor after the riots at the Capitol last week plunged the country into a political crisis that could include Trump’s second impeachment.

There have been calls for Belichick, 68, to decline the award, including on Monday from Representative Jim McGovern, a Democrat from Massachusetts, who called accepting it “disgraceful.”

“Bill Belichick should do the right thing and say, ‘No thanks,’” he told The Hill newspaper.

Senator Edward J. Markey, a Massachusetts Democrat, also said Monday that Belichick should turn down the award, which could be handed out on Thursday.

“That could be the day that Donald Trump is being impeached in the United States House of Representatives for inciting an insurgency against the United States,” Markey said of Belichick on Boston Public Radio.

It is unclear whether Belichick, who has won the third-most number of games in N.F.L. history and a record six Super Bowl titles as head coach, will accept the award. The Patriots did not respond to multiple requests seeking comment.

With time running out on his presidency, Trump has been leaning into sports, awarding medals to athletes. But after the attack on the Capitol, the sports world is having second thoughts about being associated with the president.

News of Belichick’s award surfaced on Sunday, the same day that the P.G.A. of America said it no longer planned to hold its 2022 P.G.A. Championship at Trump’s golf course in Bedminster, N.J.

Still, few sports teams have been as closely associated with Trump as the Patriots.

The owner, Robert K. Kraft, has been a longtime friend of Trump, who often attended Patriots games before he was elected president. The team’s former star quarterback, Tom Brady, played golf with Trump.

Trump has leaned on his relationship with the Patriots throughout his four years in Washington. In 2018, he appointed Belichick to serve on the President’s Council on Sports, Fitness and Nutrition. Belichick was reappointed to the council in December.

The year before, Trump made it known he was rooting for the Patriots in their Super Bowl victory over the Atlanta Falcons. The team accepted his invitation to visit the White House after the game, a ceremony that has grown more fraught in his term.

At the ceremony, Kraft gave Trump a personalized Super Bowl ring that included 283 diamonds, a nod to the 28-3 deficit that the Patriots overcame.

But Trump’s divisiveness has repeatedly put the Patriots in an awkward position, particularly in 2017. Just a few months after the team visited the White House, the president repeatedly criticized the N.F.L. and its owners for not firing players who knelt during the playing of the national anthem to protest social injustice and police brutality against African-Americans.

Two years later, after the Patriots won another title and many players publicly opposed the president, they did not make the trip to Washington because of what they said were scheduling conflicts.

Kraft, the Patriots owner, has known Trump for decades and considers him a friend, but has also given money to Democratic candidates and liberal causes.

Brady, who is now with the Tampa Bay Buccaneers, briefly kept a red “Make America Great Again” cap in his locker but removed it after being asked about it by reporters.

Belichick rarely speaks publicly about matters beyond football, let alone American politics. But he did break his silence to urge the federal government to support Armenians in their conflict with Azerbaijan over the disputed region of Nagorno-Karabakh. In a video posted on Instagram in October, Belichick asked for donations to the Armenia Fund. A few weeks later, he said he hoped that the United States would take action against Turkey and Azerbaijan “for their unprovoked and deadly attacks on Armenians,” according to the Boston Globe.

Belichick, though, did not call out the president, whom he considers a friend, by name.

Whether Belichick still considers Trump a friend after he urged supporters to storm the Capitol is not known.

Many presidents have given the Presidential Medal of Freedom to sports figures. Last week, Trump gave it posthumously to the golfer Babe Didrikson Zaharias, as well as two other golfers, Annika Sorenstam and Gary J. Player, who played golf with the president in 2019. The former football coach Lou Holtz as well as Tiger Woods and Mariano Rivera, the longtime Yankees reliever, are among a long list of others to receive the award from Trump.

The award is for “especially meritorious contributions to the security or national interests of the United States, to world peace, or to cultural or other significant public or private endeavors.”

The Most Important Thing Biden Can Learn From the Trump Economy

Mihir Kumar Jha - January 14, 2021 0
Business
“If that doesn’t get you in line, I don’t know what will,” Georgia’s governor, Brian Kemp, said last month.At Houston Methodist, a hospital system...

[Video] Patrick Mahomes Out For Game After Concussion